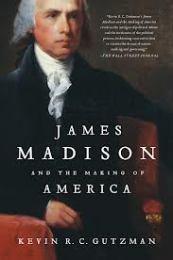 Book: James Madison and the Making of America

1. Date published- Gutzman’s 2012 work is the most recent work about James Madison available. It is a welcome addition to Madison biographies specifically because it is a generation removed from Rutland’s work and benefits from an updated perspective. Possibly reflecting on the conservative views from the author and the mood of the country, generally a great deal of time is dedicated to the struggles of government action. Many other works of Madison obviously highlight his role in creating a modern constitutional republic, but it was 2012 in which modern thinkers pondered the role of government and the grey areas that complicate the issue. Perhaps succeeding generations will find this aspect of Gutzman’s focus a bit narrow, but this link to such a poignant philosophical struggle highlights Madison’s own challenges and certainly the strength of such a recent work and fresh perspective.

2. Scope- This category was created to truly highlight the presidency of each man and hopefully make selections that cater to that criteria. Gutzman’s book is tricky to examine in scope. The “Father of the Constitution” is aptly nicknamed and Madison’s efforts in both the Philadelphia Convention and the ratification struggle are the best parts of the work. Gutzman masterfully unravels the weekly (sometimes daily) developments in the colossally important process. If Madison was an Alexander Hamilton or even a John Jay this scope would be perfect. He is not. Madison is the fourth president of the United States and consensus founder or at least co-founder of the Democratic-Republicans. Gutzman is seeking to put Madison in the context of Making America and though he nails the Constitution part, the lack of coverage of the presidency conveys a sense that the presidency of James Madison was not integral in shaping America. The lack of scope can simply be highlighted by the fact that the Constitution construction is covered in 190+ pages. The enormously significant time serving as Secretary of State and President is given just 55 pages. Events such as The Louisiana Purchase, Embargo Act, War of 1812 and even the tremendously significant match with Dolley Madison are seemingly marginalized in this work. It takes away from the overall scope.

3. Author-Kevin Gutzman is a tricky character to take up as someone to write an unbiased biography. He continues to be a History Professor at Western Connecticut State University. He has written many works on the Revolutionary Era especially on Virginia politics and their role in the Revolution. He certainly checks all the boxes when it comes to credentials and legitimacy. It should not be a surprise to readers that Gutzman has dedicated much time and research into the Constitution itself and frequently classifies himself as a states rights activist. Without even researching this author it is clear from this work that Gutzman values an Anti-Federalist. The politics from this era are tricky to view in the scope of the 21st century and trickier still is trying to reconcile Gutzman’s often staunch libertarianism with his criticisms of Madison. It is obvious from the get-go that Gutzman does not put on airs. His writing style is very direct, even demeaning to a reader expecting the self-described “definitive biography.” It could very well be considered one of the more accessible works but Gutzman’s biases become ever more clear because of his choice of words. For example, Gutzman tries to suggest that something as complex as the War of 1812 would have “obvious” conclusions.  Shockingly, Gutzman, as someone from academia, cites little when making bold analyses and rarely delves too deeply into primary letters or sources. He lets his views really conflict his analysis and lets his psuedo-common man approach dumb down the book. What starts as part of the book’s charm eventually becomes evidence that Gutzman is not as interested in being a scholar as once thought. Mr. Gutzman “obviously” is a confused individual. I won’t bother to cite it.

4. Length-At just over 350 pages this work matches the criteria for a short biography. For someone attempting a shorter work on each president this is to be preferred over Rutland’s work. What Gutzman offers is a slightly longer “short” biography encompassing more about Madison’s life while still moving at a brisk pace. The trademarks of a comprehensive work such as letters, long quotations, or excessive coverage of biographical events are completely absent from the work. What Gutzman does is try to cover everything in a brief and quick way. The only exception is the middle portion which displays more of a long biography style of the creation of the Constitution. Readers will notice a very sudden transition into day-to-day developments and the slowing narrative of the Constitution. Overall, it is a serviceable source for a short biography even though it sadly does not give the Presidency its due.

5. Mission- Gutzman’s misson was to write the updated standard in biography for James Madison. He wanted to present a biography of a man and his accomplishments but also put them in the context of the world he lived in. The mission comes very close to fruition when he shows Madison’s seeming ambivalence in regards to his prime: Bill of Rights, Presidency, etc. However, the glaring omission of Madison’s presidency and lack of true inspection makes the mission less successful. If the goal is to create a new standard work, then a generation of readers will dismiss the importance of the fourth presidency along with the War of 1812 and almost single handed destruction of an opposing party. The mission comes close to completion but Gutzman left the door wide open to have his work be eclipsed before it reaches definitive status.