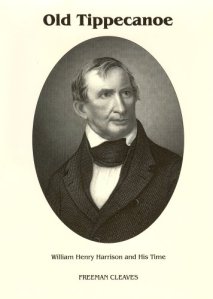 1. Date- Written during the Great Depression and between two World Wars, Cleaves’ 1939 work on Harrison is a big fish in a small pond. The work appeared 98 years after the untimely death of the ninth President and this work almost stands alone as a full scale biography. Few works before or since covered the entire life of Harrison, with most focusing on his long military career rather than his brief Presidency. This work is decently readable for modern readers, but the age certainly shows. His matter-of-fact style translates little narrative flourish as battling on the frontier or arguing with creditors receive equal excitement if excitement is a word you would use. It seems the impetus of the work is to shed little on this forgotten President who did little to incite previous academic study. Modern readers should be prepared to leap back in time. Slaves are humble servants and Indians are bloodthirsty savages. Though dated, this work sadly is the most modern look at Old Tip. For a man so critical and essential to the frontier struggles with the Native American culture, the blanket destruction of savages leads little to the story of Harrison’s gargantuan influence in the West. All things considered, this isn’t Cleaves’ fault. The work very much represents American pre-WWII and in the midst of a Depression.

2. Scope- Opening with a detailed family tree in the foreword, Cleaves constantly strives to cover the entire life of Harrison and show this dynamic importance in American history. Cleaves wastes no time covering Harrison’s family’s storied past in the Revolution that preceded him and thrust into a compete narrative of his own life. For the Project, there are frequent urges to disparage a work set up like this volume. However, the incredibly brief 30 day Presidency seems to get its due proportional representation in Cleaves book. There are detailed and complete sections covering the storied military career that drew contemporary comparisons to Washington. Even his brief 19 month foray to Colombia is shown with due scope as his military career shifted to a date with Federal politics. When it came time for Harrison himself to take center stage, the elections are well covered as are the cabinet pressures that defined the mid-19th century president. There is also a look to the future as John Tyler takes a prominent role as the aging Harrison becomes the first president to die in office. Harrison is thus presented much like his contemporaries probably saw him. The Presidency but a capstone of his career with the moniker Old Tippecanoe telling of military glory decades prior.

3. Author- According to the sleeve jacket of the modern edition, Cleaves became deeply interested in the life of Harrison after realizing no such substantial biography had yet been written. In a rare instance for a former President, Cleaves was able to write with a clean slate. At his disposal was an untapped trove of letters, documents and accounts mostly from a century or more before the work was completed. Despite an apparent groundbreaking work on a forgotten President, there seems to be only one other book in print for Mr. Cleaves. Drawing on his many years in academia, Cleaves is cited mostly with Civil War research as in his work Rock of Chickamauga about George H. Thomas. Though a Civil War researcher would seem to be out of place for a work on War of 1812 hero Harrison, the theme rings similar. Whether it be a President of the United States or a Civil War General logically bringing scholarly glut, Cleaves shows his flair of bringing the forgotten back to life. With that resume and 100 years of partisan politics in the rearview mirror, there seems to be little bias or worldview in the way of good old fashioned research. What follows is an unbiased and balanced work on Harrison from a well respected author.

4. Length- With over two thirds of the book dedicated to military biography and history, Cleaves seems ready to jump into the epic lengths that may be expected for a “definitive” work. However, the work never goes too far beneath the surface. Conversely, there are instances that the work takes on longer biography characteristics. Cleaves does find time to explore Harrison’s family while still briskly moving the narrative forward. Those attempting to read a book on every president will find this perfect for Harrison. A military hero with little influence on the executive, this work displays all that is needed to understand the Presidency as it stood in 1840. On paper, this checks all the boxes of a short biography. Despite its seemingly shorter length, there are few stones unturned and one goes away feeling confident that the story was told completely.

5. Mission- Few missions are as simple as the one Cleaves set out to accomplish. With almost no academic biography on Harrison, there are no theories to build on nor conspiracies to debunk. He had unprecedented access to an untold story. As an academic it would have been a treasure for the research community for this old, grizzled vet to get his due. Length is not everything, but to constrain a work of this potential to 350 pages seems to only confirm the academic neglect of this former President. Cleaves set out to shine a spotlight on a man who had been President 100 years prior who would be completely unknown if it weren’t for history buffs and/or presidential placemat aficionados. Almost by default, the mission is accomplished as no academic has even come close to duplicating Cleaves’ work. Since the 1939 classic, short and shallow works have been the norm on Harrison research. Recent works will occasionally touch on Harrison’s impressive military career or showcase his short presidency, but it is Cleaves who accomplishes the mission in toto. For a cradle to grave narrative on the man, this is your best bet.