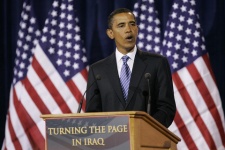 No one likes war. Yet presidential history seems littered with tales of heroic battlefields, triumphant generals and American strength. Presidential contests have are historically about war too. Incumbents and challengers alike have won many elections on both pro- and anti-war tickets. So history shows us electing legendary generals like Washington and Grant (not to mention lesser knowns like Hayes and Pierce (are they presidents?!?!) ). Yet, America has not chosen a general since Dwight David Eisenhower was re-elected in 1956.

Conversely, opposition to war is not exactly new in the American physique. Despite what some boomers may say, war-protesting was not invented back in the 1960s. Also not new is young future presidents acting the role of pacifist “peacemongers.” These same men have on to wage military campaigns in the President’s chair. In 2008, Obama rode a wave of war opposition to the White House. Six years later, he stands on the verge of a military escalation. This change is seemingly shifty.  It is by no means unprecedented.

Let’s take a look at some examples…

Our current chief magistrate wages war in the Oval Office today. However, he was not always gun-ho about intervening in Iraq. In fact, the clip below shows a young Barack Obama saying he opposes the Iraq War itself. Six years later he was president.

Much like Obama, President Bill Clinton never engaged in a full scale ground war but was no stranger to military conflict in the 1990s. Some examples include extended engagements in Somalia, Kosovo, Afghanistan and Sudan. Also much like his successor, Clinton’s early years were littered with opposition to war. In 1969, Clinton narrowly missed induction into war even though he was drafted. In an extended letter to Colonel Holmes we see a young Clinton clearly opposed war. He stated that he had been…

“working every day against a war I opposed and despised with a depth of feeling I had reserved solely for racism in America before Vietnam.  I did not take the matter lightly but studied it carefully, and there was a time when not many people had more information about Vietnam at hand than I did.  I have written and spoken and marched against the war.”

The future 16th President came into the US Congress like a freight train. The nation was at war. He took a stand. It wasn’t what you would expect. In the 1846 midterm elections freshman Whig congressman Abraham Lincoln was elected on an anti-war ticket. Though Whig vitriol included former President John Quincy Adams, it was the young firebrand Lincoln who had some of the harshest protests against war. Among other remarks the future war wager remarked that President James K. Polk, “unnecessarily and unconstitutionally begun the war.” He compared Polk’s lies and deceits about waging war to…

“…struggling for his client’s neck in a desperate case, employing every artifice to work round, befog, and cover up with many words some point arising in the case which he dare not admit and yet could not deny.” Yikes.

Whether you hold Obama in esteem or contempt for his escalating shift toward war just remember, he’s hardly original.